Learn how to create mis-en-scene portraits by mastering natural light, shape, posture and gaze. Learn how to balance what is wanted as a photographer and what the subject is willing to give. Develop an intuitive approach to portraits by improving your capacity of feeling about the subject and not only seeing.

Hellen van Meene was born in 1972 in Alkmaar, Netherlands. From 1992 to 1996, she studied photography at the Gerrit Rietveld Academie in Amsterdam. During this time, she briefly studied at the College of Art in Edinburgh, Scotland, in 1995.

Since the mid-1990s, van Meene has garnered attention for her staged, yet intimate, photographs of adolescent girls and androgynous boys. Her formal and lighting sensibility is partially informed by her Dutch predecessors like Johannes Vermeer and she originally chose her subjects within her hometown of Alkmaar. However, within the last decade she has gathered models from abroad, notably Russia and Japan.

In 2004, she introduced teenage mothers and mothers-to-be from Russia, Latvia, and the United Kingdom into her coterie of subjects in the midst of palpable coming-of-age turning points.

For the series Going My Own Way Home (2007), van Meene addressed the visual, economic, and cultural context of her sitters more directly than in her prior series, integrating the panoramic format and still lifes alongside her characteristic portraits to capture the inhabitants of an impoverished post-Hurricane Katrina neighborhood in New Orleans.

Solo exhibitions of van Meene’s work have been organized by Sadie Coles HQ in London (2000 and 2008), Museum of Contemporary Photography in Chicago (2002), Folkwang Museum in Essen (2007), and Fotomuseum Winterthur (2008). Her work has also been included in major group exhibitions like the Biennale for Architecture in Venice (2000), Fotografen in Nederland een Anthologie at Gemeente Museum Den Haag (2002), In Sight: Contemporary Dutch Photography from the Collection of the Stedelijk Museum at The Art Institute of Chicago (2005), Family Pictures at the Solomon R. Guggenheim Museum in New York (2007), and Paris Photo in Carrousel du Louvre in Paris (2008).

The artist received the Startstipendium in 1998 and the Charlotte Köhlerprijs in 1999. 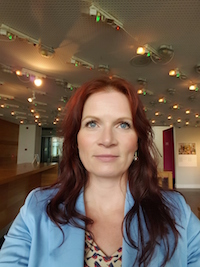 “It has nothing to do with being beautiful or not; it’s more about chemistry. And this can be based on the mood they have, or the hair, or the skin, or if they are fat, brown, freckled. It’s just there is something inside them that I feel. It’s more like I am looking with my belly rather than my eyes.” Hellen van Meene

If you want to be kept informed about Hellen van Meene, you can go on Facebook, LIKE Eyes in Progress or her own page and add us on your list of interests.

Masterclass – Projections
Hellen van Meene will spend time talking about her own work and the different projects she has worked on. She will share her photographic references with the group and explain the context while shooting her photographs.

Portfolios reviews – Projections
Each participant will receive a critique of their work.

Shooting sessions
Each participant goes shoot his own portraits: they will be asked to photograph one another and also, a few models will be available. Help with directions and locations in Amsterdam will be provided by the workshop team if needed. Participants are encouraged to go back and forth at the studio, show what they’ve done to Hellen van Meene and get feedback and improvements suggestions. If the participants prefer to focus on editing and sequencing an existing series, they need to bring numerous prints at the studio.

Back at the studio
Through the selection and discussion of the best images of the day, the participants will work together with Hellen van Meene towards developing their own photographic style and hopefully, see their overall approach improve.

Final portfolio editing
Each participant will work on a large edit of his portraits, then they are printed and laid down on a table (10×15 or contact sheet format). The final editing is made during a one-to-one session with Hellen van Meene, the other participants are encouraged to attend the sessions of the others. Once the final edit is done, the participants may work on the post-process and are then allowed to make A4 and/or A3 prints (2 max.) of their best images. They are then to write a personal statement on the work, which will be send to the evaluation committee member of their choice.

- Participants are required to find their own accommodation in Amsterdam. However Eyes in Progress will provide you with a list of affordable places.

Applications will be open until April 28th 2016.